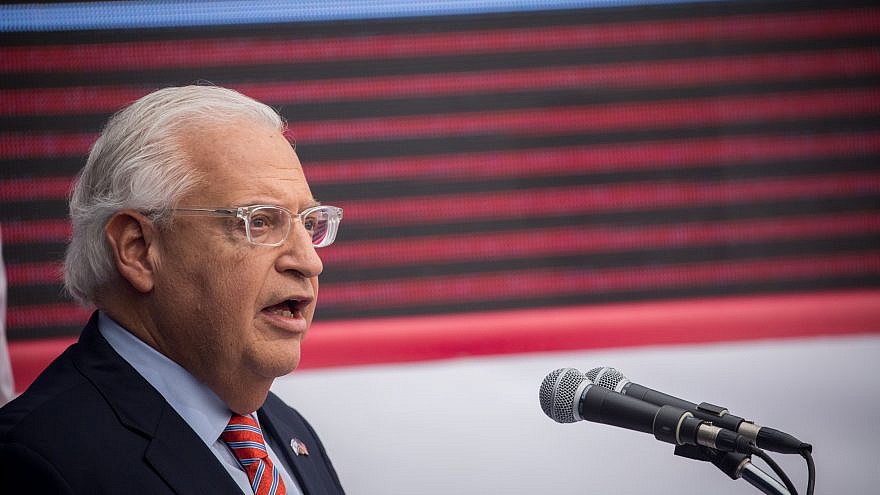 U.S. Ambassador to Israel David Friedman speaks at the official opening ceremony of the U.S. embassy in Jerusalem on May 14, 2018. Photo by Yonatan Sindel/Flash90

(May 15, 2018 / JNS) Speaking to a group of evangelical faith leaders that serve as informal advisers to U.S. President Donald Trump, U.S. Ambassador to Israel David Friedman said that moving the U.S. Embassy to Jerusalem is part of a “once-in-a-lifetime opportunity to make the world a better place.”

Overlooking the Western Wall and Temple Mount, on the rooftop of the Aish HaTorah Jewish learning center, Friedman thanked the faith leaders for their support and celebrated the move of the embassy, but cautioned, “Today is not a day to rest on laurels. We have a lot of work to do, and we are just getting started.”

“We have a problem with a Palestinian leader [Mahmoud Abbas] who says that the Jews were responsible for their own deaths in the Holocaust, and we have a problem with Palestinian leaders who tell 14-year-olds that the Gaza border has been breached, and they can go ahead and march on to Jerusalem, only to find that the Israeli Defense Forces are waiting for them,” said Friedman.

He added: “That’s a suicide bomb on a large scale.” 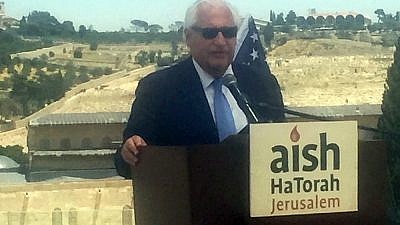 The ambassador told the group of high-profile evangelical leaders, organized by Pastor Mario Bramnick, president of Latino Coalition for Israel, that Tuesday represented the one-year anniversary of his taking office as ambassador.

“I hoped to get the embassy moved in my first year,” said Friedman. “We cut it close.”

He compared the continuous signing of six-month waivers by U.S. presidents to postpone completion of the 1995 Embassy Relocation Act to the scene in the famous Snoopy cartoons, whereby Lucy kept pulling the football away from Charlie Brown as he got ready to kick it.

“We finally got to kick the ball,” he said.

‘Truth withstands the test of time’

Friedman related that as a young teen, he had been intent on becoming a rabbi, but was talked out of it by his father. “There were two times I saw my father cry. The first was when my grandfather cried. The second was when I told my father I wanted to become a rabbi.”

Friedman frequently projects his affinity for the Jewish people and biblical scripture. In his current position, Friedman noted that he was careful to make certain that all the furniture in the embassy office is “out of the government catalogue, not anything fancy,” while adding that the office has been beautified by Jerusalem artists who were eager to lend their artwork, and that the “centerpiece of my office is a painting of the 12 spies.”

Explaining the significance of the painting, Friedman explained: “Moses sent out 12 spies to tour the land of Israel, to see if the land was conquerable. These spies were among 12 of the greatest leaders of the Jewish people. Two of them, Joshua and Caleb, said ‘we can conquer the land,’ while the other 10 said ‘we can’t get there from here—the land is filled with giants.’ ”

“I promise never to make that sin in this office,” he said.

Friedman related that Jerusalem has been the capital of the Jewish people for 3,000 years. “That is a fact. The facts haven’t changed in 3,000 years. The way we approach the facts, with optimism and courage, is how the Trump administration approaches the region.

“We are trying to do something different,” he continued. “Not to base our policies on hopes and dreams, but based on reality and facts, based on truth. Truth withstands the test of time. That’s the way we have approached foreign policy. Any policy based on any other values is built on quicksand and won’t survive.”